Perry has worked with and continues to work with some of the biggest and most respected names in the entertainment industry. Here are just a few:

From inspiration to creation and everything in-between, Perry has a working knowledge of just about every aspect of the entertainment industry. He can do it all, but has focused most of his abilities in the world of comedy. After moving to Los Angeles from his hometown Washington DC, Perry honed his skills, writing and performing at such comedic institutions as The Groundlings, ACME Comedy Theater and the world famous Comedy Store on Sunset Blvd. Perry has seized his opportunities to write, produce and direct for some of the funniest entities on the planet, including Saturday Night Live and The Jim Henson Company. Perry currently works for Happy Madison Productions and lives in North Hollywood with his wife Julia, their amazing daughter Marley and their ridiculous pets. 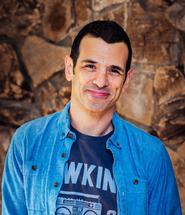 from foley and fx to VO and scoring